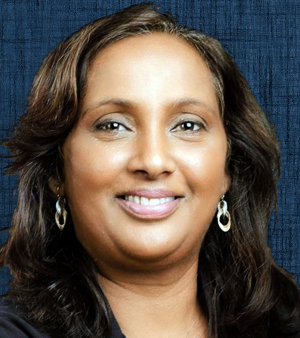 Ms. Nathai-Gyan is a graduate of York St. John University, UK with a Master of Arts in Leading Innovation and Change and from UWI in Zoology and Botany in addition to post graduate courses in Environmental Biology.

Her career started at the Forestry Division of the Government of Trinidad and Tobago lasting for over 20 years – serving as Head of Wildlife for the last 13 years of her employment. During this time she administered wildlife and wetland conservation programmes, including the related Conventions of CITES and Ramsar and provided secretariat duties for the Cabinet-appointed Wildlife Conservation, Honorary Game Warden and National Wetlands Committees.

She has authored either singly or jointly, papers on a range of wildlife and wetland related topics, delivered lectures/presentations, as well as facilitated workshops and seminars in this area of specialization. She has also consulted on the first ever science – based national wildlife survey, a milestone for Trinidad and Tobago.

Nadra believes in respecting the gifts of nature and its interconnectedness with human well-being.