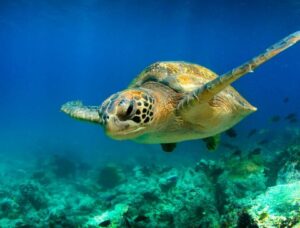 Sea turtles have long been a natural treasure in Trinidad and Tobago’s biodiversity trove, but have not been spared pillage from poachers and other threats. Over the years, there have been concerted efforts from government agencies and most importantly community groups to protect them and in 2014, all species of sea turtles nesting in Trinidad and Tobago were designated environmentally sensitive species under the Environmentally Sensitive Species Rules, 2001. This was heralded as the measure affording strictest protection, with punitive fines for injuring or selling sea turtles and their eggs and the destroying of sea turtles’ natural habitat.
The combined strategy of community-based patrols, presence of researchers, tour guides and the public during the nesting season worked well to stave off poachers and facilitate monitoring of population abundance and distribution. However, in 2020, the Environmental Management Authority (EMA) received reports from conservationists and concerned citizens of increased poaching across both islands during the closure of beaches, in accordance with the Public Health Regulations issued in the aftermath of the COVID-19 pandemic….read more via official media release